Jenagar Pty Ltd maintains a team of high achievers in the safety and training industry with combined experience spanning many decades in the mining and construction training arena and our Trainers and Staff have a diversified background from operator level to senior management in all streams of the mining, construction and drilling industries. Jenagar understands the importance of engaging professionals to provide their services, so clients can be assured only quality products are being delivered. Jenagar are happy to supply short term relief trainers/assessors in the mining industry for a wide range of contract work. 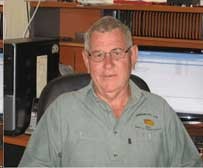 Garth commenced work in the coal mines in 1969 in Collinsville and later on in Blackwater. He eventually worked at Mount Isa Mines at both their Enterprise Mine and George Fisher Mine and later at Century Mine. He decided on a career change in 1999 and after witnessing many accidents in the industry decided to put his skills and knowledge into safety and training. He was seconded to TAFE Queensland Mining Services in 2000 where he gained all of his experience in the VET System.

He was a senior consultant responsible for managing specific training programs, Mining Registrations with DET and managing traineeships throughout the state of Queensland.

He initially set up as a sole trader working under the umbrella of various RTO’s. Since then Jenagar has grown in stature and now are providing services across a broad range of industries throughout the state. Garth has a Diploma in Management, Diploma in Business and Cert IV in Front Line Management. Garth also holds a Certificate IV in Workplace Training and Assessment as well Certificate IV in Mining. He is also an approved trainer and assessor for WHS Certification in Loadshifting. When he is not training and assessing he is continually exploring avenues to grow the business and ensure existing clients are being catered for.

Kylie takes care of the daily operations in administration and the business. She is also utilised in classes where literacy and numeracy assistance is required.

Kylie’s role is important with the high volume of Indigenous Students. Kylie aims to enrol in a number of courses relative to her skills so Jenagar can increase their scope across a broad range of modules and industries. Kylie also accompanies Garth on field trips to become involved more in the management of the business.